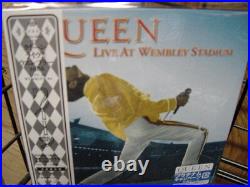 QUEEN LIVE AT WEMBLEY STADIUM - COLLECTORS JAPAN OBI REPLICA SEALED CD - Gatefold Cover with Double CD - TREMENDOUSLY RARE 2004 TOCP-67464-65 LIMITED LONG OUT OF PRINT EDITION - SIMPLY ONE OF THE RAREST JAPAN REPLICA'S EVER FOR COLLECTORS. WHAT IS A JAPAN "MINI/REPLICA-LP-SLEEVE" CD? Have you ever lamented the loss of one of the 20th Century's great art forms, the 12 vinyl LP jacket? Then "mini-LP-sleeve" CD's may be for you.

Mini-sleeve CDs are manufactured in Japan under license. The disc is packaged inside a 135MM X 135MM cardboard precision-miniature replica of the original classic vinyl-LP album. Also, anything contained in the original LP, such as gatefolds, booklets, lyric sheets, posters, printed LP sleeves, stickers, embosses, special LP cover paper/inks/textures and/or die cuts, are precisely replicated and included. An English-language lyric sheet is always included, even if the original LP did not have printed lyrics.

Then, there's the sonic quality: Mini-sleeves have dedicated remastering (20-Bit, 24-Bit, DSD, K2/K2HD, and/or HDCD), and can often be superior to the audio on the same title anywhere else in the world. There also may be bonus tracks unavailable elsewhere. Each Japan mini-sleeve has an "obi" ("oh-bee"), a removable Japan-language promotional strip.

The obi lists the Japan street date of that particular release, the catalog number, the mastering info, and often the original album's release date. Bonus tracks are only listed on the obi, maintaining the integrity of the original LP artwork. The obi's are collectable, and should not be discarded. All mini-sleeve releases are tremendously limited editions mainly pressed on future orders only and once released immediately out of print.

Japanese digitally re-mastered Mini LP replica Limited Edition Collection with OBI sash down the front only 2,000 Collector pieces made world-wide and are immediately Out of Print. Recorded from the finest Original Masters available. Comes with anti-static sleeves similar to Vinyl LPs, Cardboard packaging like an LP.

Actual miniaturized version of the 12 LP in 4 CD version. & TYPE IN OBI OR QUEEN INTO THE SEARCH FIELD WITHIN OUR STORES SECTION AS YOUR PERSONAL CODE AND ALL INDIVIDUAL TITLES + INFORMATION WILL APPEAR. Bigger-than-life and proud of it, Queen's tongue-in-cheek pomposity was ironically one of its most endearing charms. This double-disc live album recorded at the band's typically massive 1986 Wembley Stadium stand in support of its A KIND OF MAGIC album is a perfect distillation of the band's overarching intentions--and virtually every'70s/'80s rock cliché punk rebelled against. The tracks may reverberate with the boominess of the punter's paradise they were recorded in, but it's an ambience that underscores the shows' propulsive, populist intent.

Latter day hits like "Under Pressure" and "Another One Bites the Dust" may have their nascent club-beat savvy hammered into conformity with thumping rockers like "We Will Rock You" and "Tie Your Mother Down, " but then this is as unapologetic as stadium rock gets. Mercury, May, Deacon, and Taylor are in top form throughout, shrewdly building the show into what, given its relatively late recording date in their career, might as well be an emblematic greatest hits live (especially on its brisk-paced second disc) experience. FACTORY SEALED OUT OF PRINT PRODUCT is IRREPLACEABLE and therefore NOT RETURNABLE.

International Buyers are responsible for their countrys. Mymusicfix has been told we have the best collection of Rare, Out of Print music collectibles on E-Bay. The item "QUEEN Live at Wembley Stadium 86 REPLICA TO THE ORIGINAL LP Sealed JAPAN OBI CD" is in sale since Tuesday, May 30, 2006. This item is in the category "Music\CDs". The seller is "mymusicfix2" and is located in Lake Forest, California. This item can be shipped worldwide.